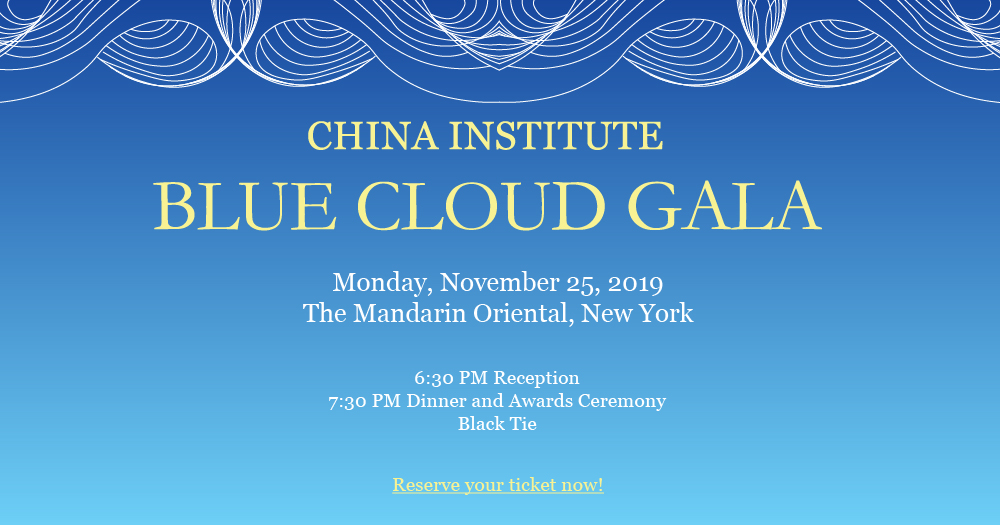 Named for the “Qingyun” or “Blue Cloud”, Blue Cloud Award represents the traditional Chinese symbol of high virtue and status. Since 1984, China Institute bestows this honor on people whose exceptional achievements contribute significantly to U.S.-China friendship and understanding.

Blue Cloud Award Honoree: PIN NI, President, Wanxiang America Corporation
Pin Ni is the President of Wanxiang America Corporation, the company he started in 1994. The company’s revenue has grown to $4 Billion to date, incorporating automotive, clean energy, and real estate investments and advancements with operations in 27 U.S. states. He serves as vice chair of China General Chamber of Commerce – USA and board director of World Business Chicago, the Chicago Council on Global Affairs, and The Nature Conservancy Illinois Chapter. He is a member of the Northwestern University Board of Trustees and the Advisory Board of the RAND Center for Asia Pacific Policy.

Blue Cloud Award Honoree: SOPHIA SHENG, China Institute Trustee and Art Patron
Sophia Sheng had a successful career with IBM in their Internal Telecommunications area. After retiring, she became a strong supporter of China Institute. As Chair of the Development and Building Committees at China Institute, Sophia was instrumental in orchestrating the organization’s move to Lower Manhattan and continues to manage the expansion of China Institute’s space. She has also pushed for greater engagement around food and fashion and deeper connections to artists creating commentary and unique work that mirror the complexity of China today. In recent years, Sophia has assembled a most impressive and diverse collection of Contemporary Chinese Art, with a special emphasis on sculpture. In addition to their deep patronage of China Institute, Sophia and her husband Abel are supporters of Chinatown Health Clinic, Rutgers University, Newark Museum and the Honolulu Museum.

Special Lifetime Achievement Award Honoree: EZRA VOGEL,Professor, Harvard University
Ezra Vogel is the Henry Ford II Professor of the Social Sciences Emeritus at Harvard. After graduating from Ohio Wesleyan in 1950 he received his Ph.D. in 1958. Vogel succeeded John Fairbank to become the second Director (1972-1977) of Harvard’s East Asian Research Center and Chairman of the Council for East Asian Studies (1977-1980). He was Director of the Program on U.S.-Japan Relations at the Center for International Affairs (1980-1987) and, since 1987, Honorary Director. He was Chairman of the undergraduate concentration in East Asian Studies from its inception in 1972 until 1991. He was Director of the Fairbank Center (1995-1999) and the first Director of the Asia Center (1997-1999).

Market Is Risk On

Market Gains To Continue Into Next Year

The Impact Of BITO